This is a key concept for preventing climate change. To achieve close to 100 percent renewable energy we need innovations in energy generation, transport and storage. A schematic of the innovative components for a global renewable energy network are shown below. 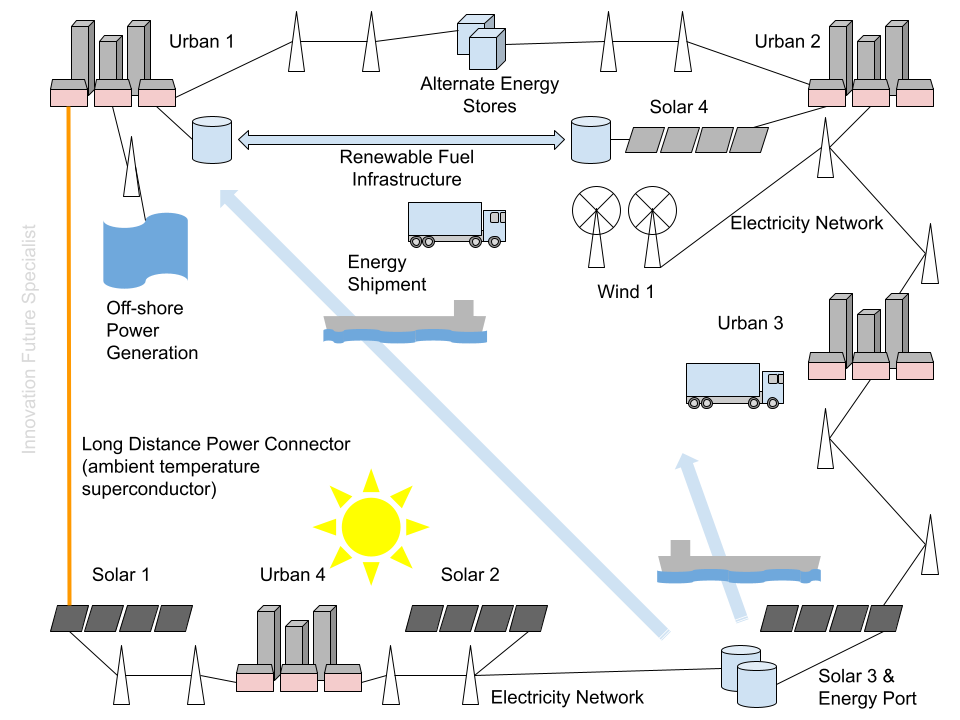 All of the urban areas depicted have access to a resilient energy network. This consists of electrical energy provided by existing and future conventional power networks (e.g. overhead or underground high voltage cables). These may use high voltage AC or DC. In addition to energy generation facilities, the network provides short and long term energy storage facilities.

The coastal urban area [top left] has access to an off-shore power generation facility (e.g. wind, wave or tidal), a conventional or modern electrical power network, and a port that receives shipments of energy. In this scenario the energy shipments arrive in the form of fuel created from renewable energy. This fuel can be stored locally, and via a fuel infrastructure it can be pumped to other sites, depending on demand.

This has access to electricity power networks, and has nearby facilities for solar and wind power.

This has access to electricity power networks, and two nearby solar power facilities.

Solar power is used by the Energy Port to convert electricity into a form of potential energy (e.g. chemical / fuel, or other innovative forms of energy storage). This potential energy is shipped to energy consumers.

This is based in a northern lattitude that experiences intermittent levels of daily solar radiation in the summer, and poor levels in the winter. Its energy is fed into the electricity network and to a local facility that manufacturers renewable fuel.

Renewable energy is used to manufacture fuel (e.g. methanol, ethanol, methane, ammonia or hydrogen). Such fuel manufacturing processes are expected to have a neutral, or negative, carbon footprint. However, combustion of the fuel in an air is likely to lead to emissions of local air pollutants - even burning hydrogen in air might produce emissions of nitrogen oxides. So combustion should be avoided, if possible. Fuel cells are recommended to convert the fuel directly into electrical energy, thus avoiding pollution issues.

The schematic includes lorries to represent the shipment of fuel and other forms of potential energy to remote villages, and perhaps to some manufacturers and construction sites.

Assuming a breakthrough innovation is eventually achieved in ambient temperature superconductors, the schematic shows a long distance electrical power connector between Urban 1 and Solar 1. Such superconductor connectors do not need high voltages, meaning that costly high voltage infrastructure is not required.

It might also be possible to use such superconductors to store energy [if the high magnetic fields do not turn off the superconducting attribute].

Help is available to you on this topic: just ask.